Inanga. Pearly white, greyish green, and blue can be translucent or very opaque. This type of stone is a highly prized type of pounamu by Poutini Ngāi Tahu. It gets its name from the juvenile native minnow or more commonly known as whitebait. It is a softer stone and when worn it absorbs the natural oils of the body deeply and can turn a lovely light brown. 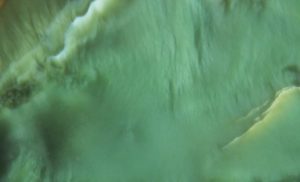 Shape:   The Roimata which means "Tear Drop" is a comfort stone representing strength and courage. It can be gifted to people in times of grief to signify they are not alone through tough times.
Measurement: Length 100 mm or 10 cm

Blessing of the Pounamu has been done by the carver.
The custom of blessing has strong origins within traditional Maori culture, not just with Pounamu. Maori people often based their lives around the concept of ‘Tapu’.
Tapu is a supernatural condition applied to people, objects, behaviours or customs by Rangatira (chiefs) or Tohunga (experts) who acted as channels for the Atua, working on their behalf.
Atua are supernatural entities; gods, demons or deitys - and the term is now used to denote meaning to the Christian God.
Many Maori trace their ancestry back through Atua in their whakapapa (genealogical line). It was also used as a way of rationalizing and perceiving elements of the world that couldn’t be explained. Atua and Tapu was used much like a modern religion, being the governing force behind behaviours of the Maori people.
Everything natural, built, carved or belonging to priests or other persons highly ranked, had Tapu, which meant it was connected to the spirit world and the Atua.
Before these could be touched, used or eaten a blessing had to be performed to remove the Tapu, this was called Noa. Noa or being 'freed from Tapu' most commonly came from Karakia (prayer), water or food blessings, however it can be achieved by any form of blessing if the result is to remove or neutralize the Tapu.
Noa was a practice used to sever the ties from the spiritual world, keeping it firmly in their human world. As Tapu was literally tied to everything, Noa would have to be performed whenever the Maori received, made or cooked anything, or for key moments in their life.
These parameters were put in place to protect the environment and people ensuring that they both flourished in unison and that everything and everyone was granted the respect that was deserved. Members of a community would not violate the Tapu for fear of retribution, including bad luck,  punishment or even death as a result of angering the Atua in which it was connected to.
This was why the Noa blessings were so important and performed regularly within the Maori culture. Women, particularly Ruahine were integral in this process (whakanoa) and seen as potent symbols of Tapu removal.
People were born with Tapu and those who could trace their ancestry back through Atua in their whakapapa were considered higher up than others, under the gods special care. It was up to each individual to maintain and preserve their own Tapu and respect the Tapu of others and places.
Maori society was a hierarchy in which men and women maintained their Tapu, just as they maintained their villages by protecting their boundaries. Tapu rules regulated how they ate, with whom they ate and what they did with anything else that would be related to their persons. Certain situations would give people more Tapu, such as; woman giving birth, warriors going to battle and men carving.